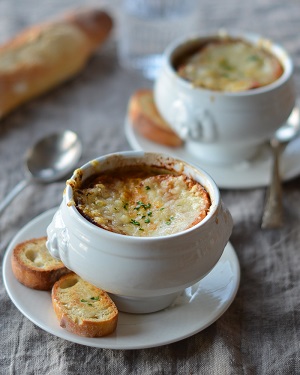 One of the French cuisine classics is the coq au vin, a delicacy based on cockerel, Burgundy wine, and mushrooms. Another classic to start the meal, less known, is the Tarte flambee, an Alsatian dish consisting of a sort of bread stuffed with cream cheese and bacon. One more classic of the French cuisine is the paté, which is not similar to mashed potatoes as many people think but it’s more like a savory pie.

The crepe is a must to eat in Paris! The origin of this classic French cuisine is Breton. In Paris, and in all the Nation, you can taste crepes in every version, savory or sweet. The dough of the crepe is made with eggs, flour, butter or oil, and milk.

If you are brave enough to try every Parisian cuisine classic, you can’t miss the chance to taste Burgundy snails, stewed with butter and parsley.

While some French recipes are famous all over the world, other foods are as typical as the most famous but less known. For example, in France, you can taste great oysters! It is a luxury choice but still a good one.

The Raclette is another less-known delicious dish of French cuisine. It is made with melted cheese, potatoes, and pickles.