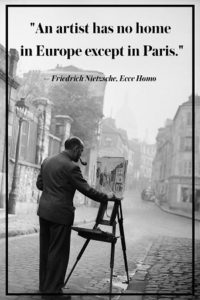 Quotes for IG captions about Paris

As you might already know, I love proposing quotes about Paris for IG captions. I think that literature is one of the best ways to get to know the culture of a nation, and sometimes even a city. Also, books about Paris often propose the perspective of a stranger. Americans in Paris who have written or said something about the city do make you understand something more about the magic atmosphere you live in Paris.

Some of the quotes I propose are by writers or philosophers, and they surely have a deeper sense. The others may appear shallower, but they also convey characteristics and peculiar impressions of the city.

I always say that I prefer shorter puns to pair to my shots for Instagram about Paris – follow me at @parisrentapartments! – but, I have to admit that quotes are the best for posts with something ‘more’.

Here are some selected quotes to use as IG caption for your shots in Paris. They will help you to express how you feel about the city!

The best of America drifts to Paris. The American in Paris is the best American. It is more fun for an intelligent person to live in an intelligent country. France has the only two things toward which we drift as we grow older – intelligence and good manners. (F. Scott Fitzgerald)

An artist has no home in Europe except in Paris. (Friedrich Nietzsche)

To err is human. To loaf is Parisian. (Victor Hugo)

The chief danger of Paris is that it is such a strong stimulant. (T.S. Eliot)

A final reminder. Whenever you are in Paris at twilight in the early summer, return to the Seine and watch the evening sky close slowly on the last strand of daylight fading quietly, like a sigh. (Kate Simon)

Cities have sexes: London is a man, Paris a woman, and New York a well-adjusted transsexual. (Angela Carter)