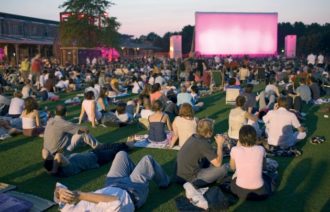 Parc de la Villette open-air film festival is back! Until August 21, 2022, you have the possibility to watch some of the best movies without giving up the pleasure of feeling the Summer breeze on your skin.

The open-air film festival in Parc La Villette is one of the most loved events in Paris. Plus, it is totally free!

As always, this year the program includes traditional films along with new contemporary proposals. Joining this film festival in Paris means having the possibility to appreciate once again the best classics and discover something new. It is such a magical event to take part in! You can share your passion for movies with people from all over the world! Most of the movies are projected in the original language or with subtitles. Every year there is a theme. The one for 2022 is “Dancing”. Here’s what to expect in August 2022 at the film festival in Parc de la Villette!

Here is the program for August 2022 of the Parc de la Villette open-air film festival.