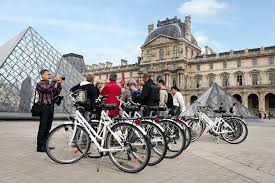 Paris by bike. Rentals and tours

Bike-sharing in Paris is one of the favorite activities by both Parisians and travelers. This means that if you participate in bike-sharing you will surely live like a local in Paris. It is also a great way to move around the city from your accommodation without polluting!

Going around Paris by bike is one of the best experiences because you can truly admire the point of view that you can’t see from the underground or by bus. You can focus on what you like and go whatever you want.

You won’t move around Paris following the specific
routes of the other transports!

Moving around by bike in Paris is so popular that you will find many top tens of bike tours and bicycle rentals services. Here are which ones I recommend too!

If you want to rent your bike once you are in the city so you can explore Paris riding a bicycle, here are some of the best bike rentals services in Paris you can refer to. They also organize great bike tours too! And if you don’t believe just me, take a look at the great reviews on the net.

Whether if you have your bike or you are going to rent it, take a look at the bike tours in Paris ideas!

The most recommended bike-sharing service in Paris is Velib Metropole.
Since 2018 you can rent electric bikes to reach more than 60 places in Paris neighborhoods.

Using Vélib Metropole, you will take a bike in a bicycle-sharing station and then put it back to the station that is closer to you once you don’t need the bike anymore.

To use Velib bike-sharing, you need to subscribe to the service. You can opt for a daily, weekly, monthly or yearly subscription! That is why it is so suitable for everyone. If you want to know more about docking stations and prices, I suggest consulting the Velib Metropole official site. You can also choose and pay for your subscription in advance! The only thing is always granted is that the first 30 minutes are free!

Once you have made your subscription you will also have an online map where you can see all the bike stations available.