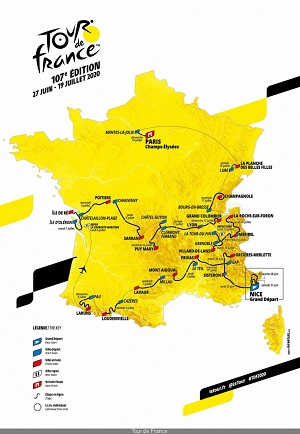 Find out all the information about the Tour de France 2022. Starting day, and final walkways dates.

The tour de France 2022 will start on June 26 from Brest, and it will end in Paris on July 18 with the traditional parade on the Champs-Elyxées.

The first Tour de France was held in 1903 – with the aim of selling more newspapers. It was created and sponsored by the French sports newspaper L’Auto, which hoped that a new and tough endurance race around the country would catch the attention of the public and increased its declining sales. The race was a success, and tens of thousands of people gathered in Paris to watch its final stage. Just like today!

The Grand Départ of the edition of this year will take place on July 1st, from Copenhagen. It will end in Paris on July 24, with the traditional closure at the Champs-Elysées.

The route of Tour de France 2022 that will characterize the Grande Boucle of this year has been officially presented. It will be a ‘Euro-Tour’, departing from Copenhagen and including Belgium and Switzerland before the classic catwalk in Paris.