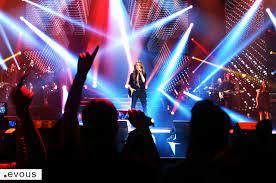 Are you looking for concerts in Paris? Coming to Paris in May is a great idea! You have the chance to explore Paris in Spring, which means having the best weather, and to join French celebrations on special dates.

If you come to Paris in May 2022 you also have the possibility to go to many concerts. Paris fought a lot against COVID-19, like every other country in the world. During the latest months, sociality is becoming a thing again. Do you feel ready to go back to concerts? If you are, here are some ideas about where to go in Paris.

-M- is back on the road! Matthieu Chedid announces a new French tour in Paris, with a series of several exceptional concerts not to be missed from May 4 to 22, 2022 at the Folies Bergère.

Shawn Mendes is back on stage in 2022! His tour “Wonder: The World Tour” passes through France and in particular Paris la Défense Arena where Shawn Mendes performs in concert on May 7, 2022.

Tool announces its return to Paris! Put a mark on your calendar, and note down this information. Accor Arena on Thursday, May 12, 2022. That’s the day of the one and only concert in the capital.

The good news for fans of Sexion d’Assaut since the famous French hip-hop group, composed in particular of Gims, Lefa, or Black M, is reforming and preparing to go back on stage. After several rumors, Sexion d’Assaut confirms a tour in 2022 and two exclusive concerts at Paris La Défense Arena on Saturday, May 14, and Sunday, May 15.

New album and new tour for Scorpions. The legendary German hard rock band will travel the roads of France in 2022 with no less than 7 concerts, including one and only show scheduled at the Accor Arena in Paris on Tuesday, May 17, 2022.