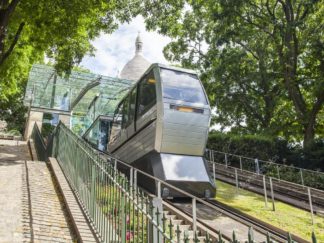 Funicular of Paris, history and infos

The funicular of Paris is one of the key elements of the Montmartre landscape. You have probably already seen it in lots of films, and TV series. Here is the main info you need about Montmartre funicular.

The first journey of the funicular took place in the Summer of 1900. Since its inauguration, it had been remodeled many times. The last renewal dates back to June 1, 1991.

The technology behind the funicular of Montmartre is very interesting. The Montmartre funicular was commissioned for the first time in 1900. It initially worked thanks to a water counterweight. The filling and the emptying of a tank under the cabin allowed the movement of the wagon in one sense or another. Over the years, the process has been modernized and renewed. Today, we can compare the functioning of this transport to a giant lift with a transparent roof. Thanks to the transparent roof, you can appreciate the view of the Sacre Coeur Cathedral, and of Montmartre neighborhoods. 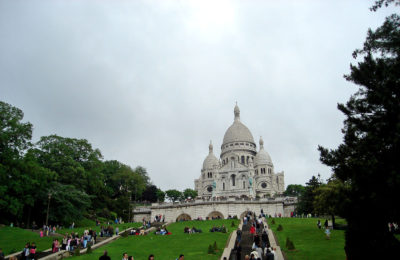 The funicular is electric and it carries more than 2 million passengers every year. The journey takes just a minute and it is fully automated. There is no driver.

This transport works from 6:00 am to 00:45 am. The ticket office closes in the evening. Buy tickets during the day!

There are different types of transport tickets and pass. You can choose between an ordinary ticket, named Ticket t +, and daily or week passes such as Paris Visite and Pass Navigo.
If you have the Navigo Pass or the Paris Visite you can use this transport as included in that formula. If, on the other hand, you have to pay for the service, the usefulness of the vehicle depends on your willingness to climb its 197 steps. Most people go up the hill with the funicular and go down on foot.