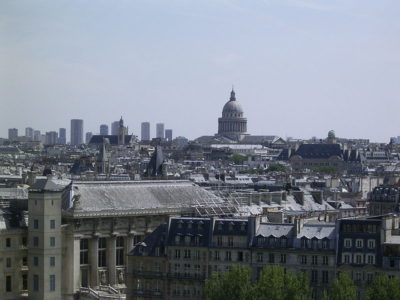 Arrondissement 5, where to go first

The arrondissement 5 of Paris is on the left of the Seine. What you might already know about it is the Latin Quarter. This is because it is one of the most lively areas of the city!

The fifth arrondissement of the city is interesting because of its history too. Arrondissement 5 is the most ancient in the city.

Romans lived in Arrondissement 5 in I century b.C.!

This arrondissement is perfect for those who love culture but enjoy lively districts! In these areas, you will see lots of journalists, students, and writers. Traditionally, it is an arrondissement that attracts lots of intellectuals. Among the attractions and landmarks, these districts stand out from the Sorbonne University and the Natural History Museum.

If you like to take a break from the big city walking in a big beautiful park, just go to Jardin des Plantes instead.

And if you are afraid to get lost, remember that the districts of arrondissement 5 are Saint-Victor, Jardin-des-Plantes, Val-de-Grace, Sorbonne.

The Latin Quarter of Paris is between arrondissement 5 and arrondissement 6. It includes Saint-Germain-des-Prés and the Luxembourg Gardens. Latin Quarter is not a real district: it is an area that owes its name to the exclusive use of Latin due to the courses of the local schools and universities in the Middle Ages.

Among the schools and universities of the Latin, district stands out the Sorbonne, the Paris II University, the Collège de France and other institutions such as the Academy of Fine Arts and the Sainte-Geneviève library.

The Latin Quarter is on the rive gauche of the Seine and is not far from the islands of the city. It is connected to the two islands of the city through several bridges. The most famous Parisian bridge connects this area to the others is the Pont de Sully.

What you can see in this quarter? The most famous monuments are the Pantheon, the Catholic church dedicated to Sainte-Geneviève; the national museum dedicated to the Middle Ages, the Luxembourg palace (base of the Senate) with the famous French gardens of Luxembourg.

In the same area, it is possible to admire some Roman vestiges, such as the Arena of Lutetia, the Roman and pre-Roman city of Gaul that were the ancestor of Paris, and the Roman baths.

The liveliness of intellectual activities not due only to the presence of many schools and universities but also to many places where you can attend many shows such as the Paradis Latin, the Odeon Theatre and the HuchetteCaveau.

In the Latin Quarter, there are also several churches to visit such as the Church of Saint-Etienne-du-Mont, the ancient abbey of Saint-Germain-des-Prés – a masterpiece of gothic architecture – and the church of Saint-Sulpice – the largest church in Paris after Notre-Dame. In this church, you can see frescoes by artists such as Eugène Delacroix, François Lemoyne, Victor Mottez.

To orientate yourself in arrondissement V, remember that the metro stations that are in this area are the following 8. Cardinal Lemoine, Censier – Daubenton, Cluny – La Sorbonne, Gare d’Austerlitz, Jussieu, Maubert – Mutualité, Place Monge, Saint-Michel.

Arrondissement 5, the market in Rue Mouffetard

One of the things that I love the most to do in arrondissement 5 is going to the market.

If you go to Rue Mouffetard, you will find a huge open market where you can buy lots of Parisian objects. You can go there after visiting the Pantheon or the Jardin des Plantes. This market is one of my favorites in Paris. 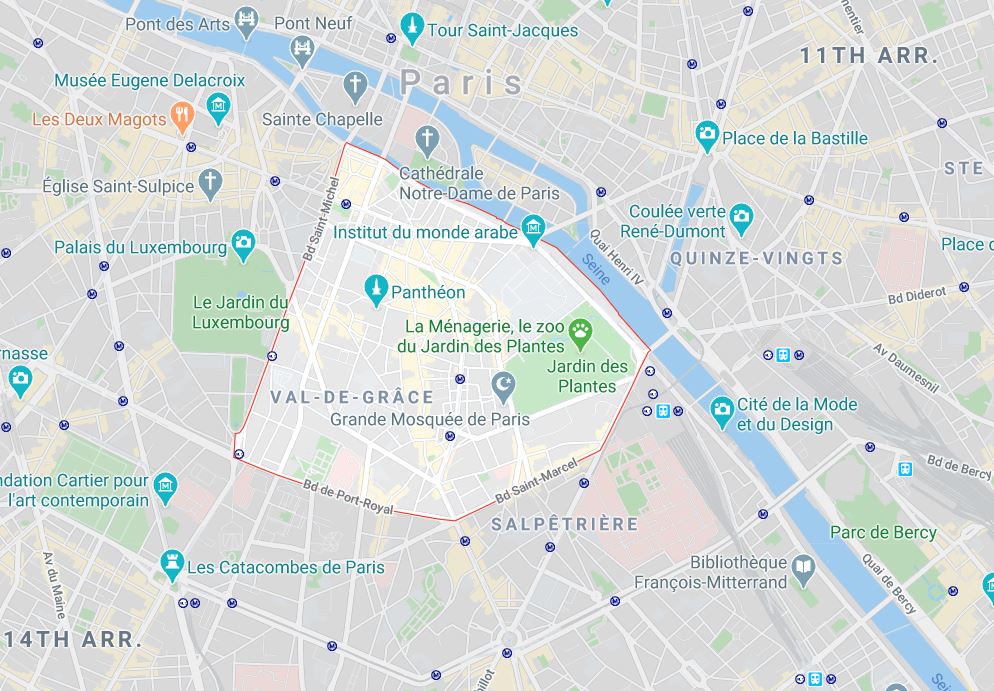 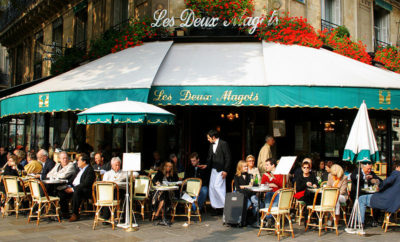