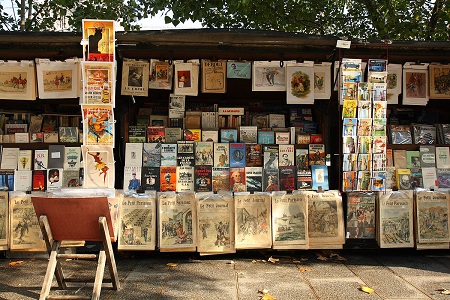 Bouquinistes of Paris are iconic! Even if Paris is usually paired with more iconic symbols such as the Eiffel Tower, the Arc de Triomphe, or Sacre-Coeur, Bouquinistes are iconic as well. Their kiosks are a must-see in Paris, and part of the UNESCO World Heritage site.

Who are the Bouquinistes

What are bouquinistes? Bouquinistes usually sells used or antiquarian books. They usually have their kiosks and stands on the banks of the Seine river. If you are on the right bank, you find them from the Pont Marie to the Quai du Louvre.

On the left bank, you can see lots of Bouquinistes from the Quai de la Tournelle to Quai Voltaire. That is why the Seine has been described as a river that runs between 2 bookshelves by Kirsty Lang from the BBC.

What can you buy from a bouquiniste? You can buy some of the most special gifts and souvenirs. Bouquinistes sell antiquarian books, vintage magazines, old postcards, tote bags. It is the place where you can make a deal or just buy something tiny to take with you such as a poster or a postcard.

This tradition began in the 16th century in little markets. Booksellers had difficult times in finding and settling in an area in Paris, which after many decades has been established as the banks of the Seine.

The term bouquinistes has been used for the first time around 1789 to indicate such booksellers. From 1859, each bookseller can establish at a fixed point. Each one is entitled to 10 meters of railing by paying an annual fee.

Bouiquinistes don’t really have a timetable. Openings are from sunrise to sunset.