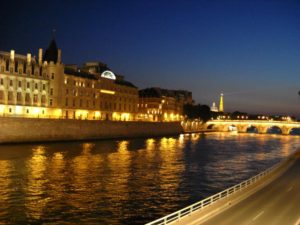 It is a known fact that in ancient times the best way to ensure cities’ prosperity was to build them near water and Paris is one of the most evident examples of it. Hence, it’s not a surprise that Paris had and still has a strong connection with the Seine.

The Seine is 776 km long, it rises at Source-Saint and flows into the English channel at Le Havre. The name comes from the Latin word “Sequana”, but the meaning of this word is still unknown; according to some it is a clerical mistake for one or more Celtic terms, according to others it is even pre-Celtic, while there is who believes that it’s the name of a goddess.

The Seine divides Paris not only geographically but also culturally, in fact there are: the right bank (the rive droite), that is the venue of business, finance and institutions (the Louvre, the stock exchange); the left bank (rive gauche) that is the venue of arts, music, students (Sorbonne, Latin Quarter, Montparnasse).

This river flows trough Paris for 13km and 10 of the 20 arrondissements where are located two of many Seine’s islands. Ile de la Citè is the most important because it’s the center of the city, where there was the first settlement. Just after the Medieval times Paris starts expanding outside this island that was the political and religious center. Now it’s still the religious center because of the Notre Dame cathedral. Ile de la Citè is linked to the small Saint-Louis island, formerly used for the grazing of market cattle and stocking wood and now an elegant neighborhood, by the Saint-Louis bridge and to the banks by nine bridges. One of them is the Pont Neuf that is the most ancent of the 37 Paris’ bridges. In fact, despite it’s name, that means “new bridge”, it was built in 1578 and it still a symbol of the city, protagonist of paintings, poems and even a movie, “les amants du pont neuf” with the famous Juliette Binoche. Others important bridges are Pont de la Concorde, built with stones from the destroyed Bastille, and Pont des Arts that is pedestrian and so full of people that goes there for a picnic, to paint or just simply for a walk.

The Seine has always attracted worldwide artists that love painting the famous quays that since 1991 are UNESCO heritage. In summer time it’s also possible to admire the Seine also form a beach thanks to “Paris Plage” that since 2002 creates on the right bank one off the biggest artificial beach in Europe with a wide program of sports, games, concerts and performances.

Not everybody knows that almost the 50% of the Paris’ water comes from the Seine that is always been very plentiful thanks to it’s many tributaries. It has also had many floodings, the most famous was in 1910 when the water arrived till Les Champs Èlysées.