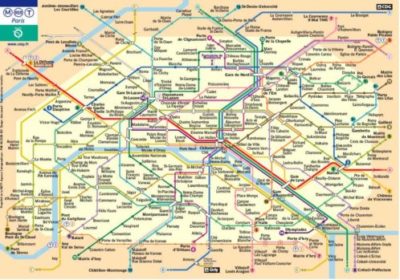 How to move by metro in Paris

Paris is without any doubt one of the biggest European city where every year millions of tourists go. Thanks to the efficient means of transport moving is easier than you think. The best way to travel around the city is by tube or as it’s called in Paris “ Metrò ”, because it’s the quickest and the most efficient, but there are also buses, tram and a cable railway.

The first Metrò station was inaugurated in 1900 and since then it has never stopped expanding, so now it counts more than 15 lines named by numbers and colors (es. The number one is yellow).

There is also another means called RAR that links the city center with the suburbs and it has five lines (A,B,C,D,E).

You can buy the tickets at any Metrò station and whenever you want thanks to automatic machines.

Remember that one ticket is valid for one journey without limit of line changes, just do not leave the barriers stations.

For more information about ticket costs (daily, weekly or 1-5 zone fare) and timetables you can go to the Metro website www.ratp.fr/en/ .

The first thing you need is a map that you can download on your phone or take a paper one, and check your journey.

Once you know which metro line (or lines) you need (es. N1-yellow) follow the directions for color and number line that indicate you where to go. Pay also attention to the line direction (es. La Defense or Chateau de Vincennes). Cross the barriers with your ticket, reach the rail and wait for your metrò, you should wait no longer than 8min.