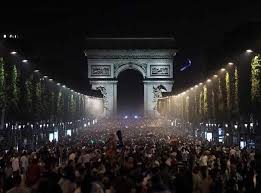 During these days of the year is very popular wondering how to spend New Year’s Eve in Paris.

New Year’s Eve events in Paris are a lot and if you are looking for something peculiar, you won’t have any troubles. There are so many events for the last day of 2019 in Paris that you will surely find something about your interests!

Anyway, there are some places to go whether is New Year’s Eve 2019 2020 or not. Going to Paris in December is the perfect way to live like a local through Parisian traditions. This means that New Year’s Eve in Paris comes always with something to do.

Where to Eat on New Year’s Eve in Paris

New Year’s Eve is always a peculiar day to live. If you want to eat in some of the best places in Paris, here some advice:

Take a look at where to eat in Paris!

One of the most traditional and interesting things you can do in Paris is the cruise on the Seine. If you explore Paris crossing it through its river, you learn a lot about the city. Also, you can opt for special cruises that cost more because of additional services.

On occasion of the celebrations of 2020 in Paris, you can join many parties and dinner. By choosing such activities, you will be entertained all night long. I like recommending this because it can be both a romantic idea and a good idea for a big group of friends.

New Year’s Eve fireworks in Paris are such a tradition! This year, there will be a big fireworks show too. It will be at one of the most iconic spots in Paris, the Champs-Elysees!

New Year’s Eve Fireworks in Paris will begin around midnight. Before that, there will be a video show from 11.30 p.m. to 11.50 p.m. The film will be projected on the Arc de Triomphe. These events are always very crowded. Just think that last year more than 400000 people came from all over the world to see it!

There are many concerts in Paris on 31st December 2019 on the occasion of New Year’s Eve. Most concerts are of classical music and they are planned in some of the most beautiful attractions in Paris.

If you are spending New Year’s Eve in Paris, you will probably spend January 1st, 2020 in Paris too!

Here are some recommendations about what to do on the first of January 2020 in Paris. Here how you can spend an unforgettable New Years Day in Paris.

I think that going to a concert at New Year’s Eve or during January 1, the New Years Day 2020, could make your day! The most crowded will be of classical music but here is my advice: