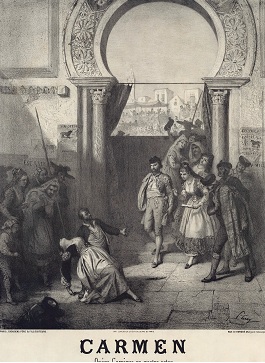 Til May 31, 2020, the Opera National de Paris in Paris is streaming online shows for free.

Bonus shows that are available for longer:

Here is how to watch the performance streamed by the Opéra National de Paris online for free:

From April 27 to May 3, the Opera National de Paris streamed Carmen by Georges Bizet. Being there in person would be an incredible emotion, since the opéra-comique by Georges Bizet was performed for the first time in Paris, on March 3, 1875. Carmen is one of the most known operas all over the world. As it has always been! Unfortunately, Georges Bizet couldn’t see how much people loved his music since he died 3 months later Carmen’s first representation.

The Opera de Paris gave the chance to merge in a Parisian atmosphere with no need to travel. They streamed Manon, Don Giovanni, Swan Lake, The Barber of Seville, a Soirée Robbins, and The Tales of Hoffmann. Concerts, exhibitions, opera, and virtual tours make staying at home not so boring.

Carmen by Georges Bizet is based on the novel by Prosper Merimée, published in 1845. Georges Bizet decided to not consider elements such as Carmen’s husband.

The librettists were Henri Meilhac and Ludovic Halévy but Bizet himself wrote part of the lyrics of the world-famous habanera, L’amour est un oiseau rebelle. Carmen is a story about friendship, love, and gypsies set in Seville, Spain, in 1820. Even if before watching the opera good advice is to read the lyrics or at least the plot of the entire work, the music of Carmen is so charming that you can listen to the music without following every single step of the story.