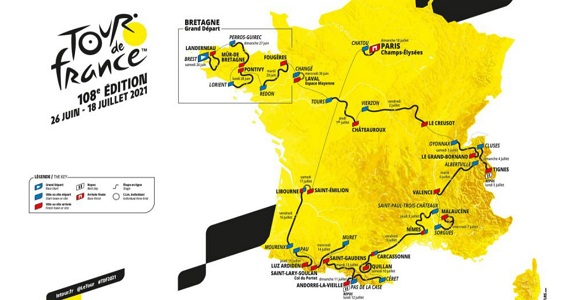 Find out all the information about the Tour de France 2021. Starting day, and final walkways dates.

The tour de France 2021 will start on June 26 from Brest, and it will end in Paris on July 18 with the traditional parade on the Champs-Elyxées.

The Grand Départ will take place on June 26 from the Breton town Brest and it will end in Paris on July 18 with the traditional closure at the Champs-Elysées, where we will meet the successor of the Slovenian Tadej Pogacar.

The route was personally unveiled by director Christian Prudhomme live at Stade2 and through official social media. After four stages in Brittany, there will be the crossing of the Massif Central and the Alps, with a double climb on Mont Ventoux, which is included in the race after 5 years. Final in the Pyrenees with the legendary Tourmalet.

Here is the list of stages of the Tour de France 2021: